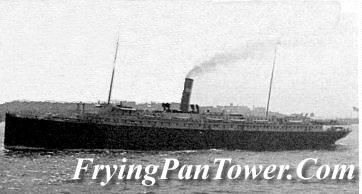 At approximately 0309 Eastern War Time (EWT) on January 19, 1942, the merchant vessel City of Atlanta was struck on the port side by one torpedo fired from U-123, commanded by Kapitänleutnant Reinhard Hardegen. Hardegen and the crew of U-123 arrived in the waters of North Carolina several hours earlier and had already discovered that merchant vessels and tankers were following predictable routes along lighted buoys offshore. This discovery allowed the crew of U-123 to track City of Atlanta for almost three hours before easing their submarine to within 250 meters of the merchant ship and firing one torpedo set to a running depth of two meters to prevent it from striking the shallow ocean bottom. Hardegen watched as the torpedo jumped out of the water twice and skimmed along the surface until it struck its target and exploded with such force that debris from the torpedo and City of Atlanta rained down on the submarine''''s deck. As Hardegen took his submarine on a "victory lap," City of Atlanta capsized to port and sank quickly with its bow protruding out of the water. Spotting additional steamer lights on the horizon, Hardegen sped off to intercept them leaving City of Atlanta burning and three survivors, of the original crew of 46 (or 47 depending on the report), clinging to wreckage for six hours until they were finally rescued.