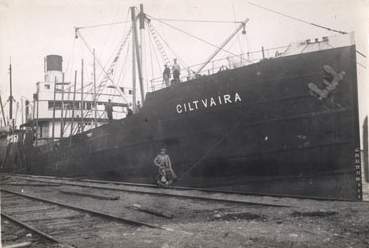 Several hours after sinking City of Atlanta, Hardegen managed to position his U-boat in the path of another freighter. Although the submarine had one diesel engine broken down because of a ruptured cooling water tube, the crew of U-123 ran the remaining engine at full speed and intercepted the 3,779 gross ton Ciltvaira carrying a cargo of paper. Hardegen ordered one torpedo fired, which quickly traveled the 450 meters to Ciltvaira and broke the freighter's back. After abandoning the ship and discovering that it would not sink immediately, several members of the crew boarded Ciltvaira to recover personal valuables. They also ran up an SOS and Latvian flags before the freighter disappeared beneath the surface. Although two members of the crew perished in the attack, the remaining 30 were overjoyed that the ship's pet cat, Briska, and pet dog, Pluskis, were rescued from the sinking ship.

When Latvia was annexed by the Soviet Union in 1940, she was one of eight ships that did not follow the orders to return home and continued to sail under the Latvian flag. U-boats sank five of these eight ships and damaged a sixth while another one was sunk by an Italian submarine.