Dixie Arrow Wrecks of NC - SaltwaterCentral.Com
About the Wrecks
Return to Main Categories
June 30, 2011 04:53 AM EDT 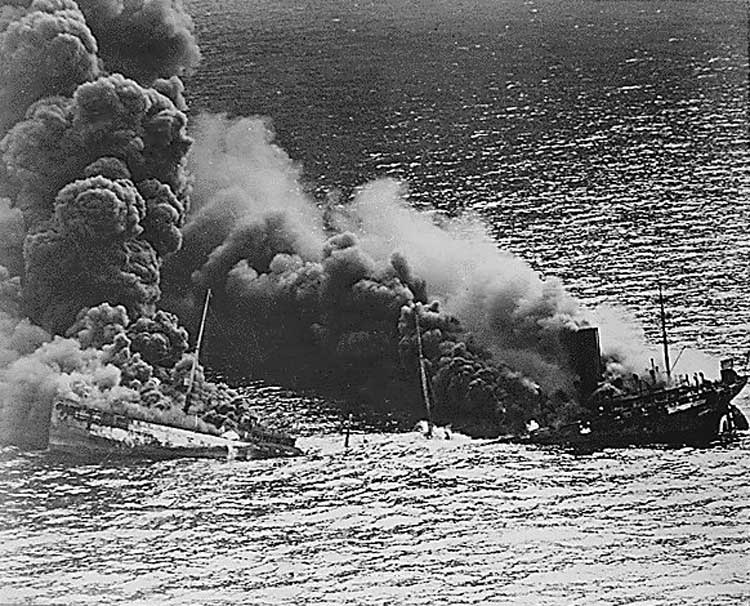 On March 26, 1942, Kapitänleutnant Walter Flachsenberg brought U-71 close to Diamond Shoals during daylight hours and slammed three torpedoes into the side of the American tanker, Dixie Arrow, laded with 86,136 barrels of crude oil. As the torpedoes exploded, they sent oil spraying over the ship, which quickly ignited. A coast guard plane arrived at the scene of the attack soon after and reported that all but one lifeboat was on fire and that men were swimming in burning water. Fortunately, 22 of the 33 men originally onboard Dixie Arrow were pulled from the inferno alive. In less than two hours from the time of the attack, the severely damaged tanker had slipped beneath the waves just miles from shore.

The Dixie Arrow was one of a series of "Arrow" ships built for and owned by the Socony-Vacuumm Oil Co., aka "Mobil", There were the Broad Arrow, China Arrow, India Arrow, Japan Arrow, Java Arrow, Royal Arrow, Standard Arrow, Sylvan Arrow, and Yankee Arrow. They were all tankers, nearly identical in size, roughly 485 x 62 x 28, and many were built by the New York Shipbuilding Corporation in Camden, NJ.

The U-71 had spent the night waiting near the Diamond Shoals Light Buoy hoping to intercept targets. With the breaking dawn, the u-boat captain, KK Walter Flascheenberg, was about the order his boat to the bottom when he spotted the masts of the approaching tanker on the horizon. He manuevered his boat against the zig-zag course of the Dixie Arrow trying to get the tanker between the U-71 and shore. At 0858 EWT, 3 torpedoes slammed into the starboard side of the Dixie Arrow and in less than 1 minute the tanker was mortally wounded and engulfed in flames. The first torpedo hit at the midship deckhouse, destroying it and killing most of the deck officers. 60 seconds later the 2nd and 3rd torpedoes hit just aft of the deckhouse and cracked the tanker in two