Keshena Keshena - SaltwaterCentral.Com
About the Wrecks
Return to Main Categories
June 30, 2011 04:59 AM EDT 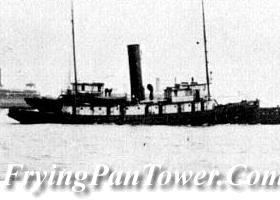 On July 19, 1942, two tugs were dispatched to tow the merchant vessels Chilore and J.A. Mowinckel out of the Cape Hatteras minefield. The two merchant vessels had run into and detonated mines in the defensive minefield on July 15 while attempting to reach port after being torpedoed by U-576. After striking the mines, both vessels were abandoned and left afloat within the minefield. Over the next couple of days, several channels were swept so that the tugs could reach the damaged merchant vessels and tow them to port. One of these tugs, Keshena, moved out of the safe channel through the minefield, struck a mine at 1630 EWT on July 19, and sank almost instantly. Although 14 males and 1 female were rescued, two members of Keshena''''s crew were killed in the unfortunate accident. Eventually the remaining tug removed Chilore and Mowinckel from the minefield successfully. Chilore, however, would eventually sink in the mouth of the Chesapeake Bay while being towed to Norfolk for repairs.