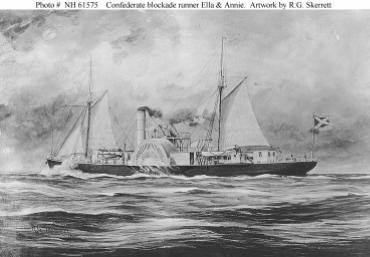 The remains of Blockaders and Blockade Runners litter the Cape Fear Coast. These wrecks attest to the ferocity of our nation''''s only internal conflict. There have been several highly publicized incidents lately involving local boaters striking the unmarked remains of a Civil War wreck in Lockwood Folly Inlet. These incidents have damaged several vessels and caused the indirect loss of one life, thus bringing this topic to the forefront.

It is the USS Iron Age, a Union Blockader, that according to locals is the wreck that is causing most of the problems. In order to understand the wreck of the Iron Age, we have to look at the entire story. It is the story of the Elizabeth, the Bendigo and the Iron Age. Together they are forever wrapped in the sands of Lockwood Folly Inlet.

The Blockade Runner Elizabeth on her 8th run through the blockade was the first to meet her fate in Lockwood Folly. The 216 foot, 623 ton sidewheel steamer left Nassau on September 19, 1863, bound for the port of Wilmington carrying general cargo consisting of mostly steel and saltpeter. On September 26, twelve miles from Fort Caswell and aground and in trouble, she was set afire by her Captain to avoid capture.

The Blockade Runner Bendigo cleared the port of Wilmington around December 11, 1863, bound for Nassau. They were no doubt feeling confident in their abilities to evade the Union forces after completing her second successful trip through the Federal lines surrounding the Cape Fear Coast. The Bendigo, a 178 ton, iron-hulled paddle wheeler (thought to be originally named Milly), was 162 feet long, 20.1 feet wide, and 10.9 feet high.

Once in Nassau and reloaded for the return trip, she set sail again for the Carolina coast. Arriving south of the main Cape Fear River channel near Lockwood Folly, she proceeded up the beach sighting what she thought was a Federal Blockader. Following the tactics of the day, the Bendigo attempted to run between the Blockader and the beach and in doing so ran hard aground. What the Captain of the Bendigo thought was a Federal Blockader was really the Blockade Runner Elizabeth.

Along with the help of local Confederates, her crew worked through the day and into the night offloading the precious cargo from her holds. The Captain of the Bendigo, having saved the precious cargo, set fire to the stricken ship and abandoned her for the safety of the confederate lines. USS Fahkee, along with the Blockaders Fort Jackson, Iron Age, Montgomery and Daylight, set out to haul the stricken vessel off the shoal.

Over the next several days they tried with earnest to pull the stricken Bendigo from the sand. On their final attempt, both the Montgomery and the Iron Age were found to be aground. Concluding that the Bendigo could not be pulled free, the Union forces opened fire on it and soon the machinery and hull were riddled with shot holes. The Montgomery soon came free, but the Iron Age was there to stay. The following morning at 4:00 am, Lt. Commander Edward Stone applied the torch and at 5:40 am the fire reached the forward magazine and the Iron Age blew up.

Keep in mind that these wrecks are LARGE, around 200 feet long, so they cover quite a large area. Lockwood Folly Inlet is a shallow inlet at the best of times. Throw in a low tide and a Civil War wreck or two and this is trouble in the making.

If you do not know the positive location of these wrecks, proceed through this area at idle speed, watching the waterline in front of the boat. In muddy water these wrecks, if lurking just below the surface, should show as a dark area in the water. This is also a case for "local knowledge." Any of the local marinas or tackle shops should be able to pin point the area of concern so that you know where to be on the lookout.

p.s. I bet the flounder fishing around those wrecks is very good!