How To: Prepare Squid Wings - SaltwaterCentral.Com
About the Bait
Return to Main Categories
February 01, 2004 05:51 PM EST


How To: Prepare Squid Wings

How To: Prepare Squid Wings

Squid, Pink, slimy, juicy SQUID. I love the stuff. It's great. There are two types of squid available. Wings and whole. Each have their own place in the bait box. Wings are the top piece off the head of large squid. They are flat chunks of solid meat. They are perfect for cutting baits for both trolling and bottom fishing. If I have a choice I prefer wings simply because you have more control over how the bait is rigged. One of the tricks that the big boys use is to salt their baits to make them tough. Over the coarse of a season it will make a difference to your pocket book. Before we salt it, it needs to be cut up and here is how.

First lets take a wing and cut it up for use as bottom fishing bait. Take the whole wing and lay in out on the cutting board flat. 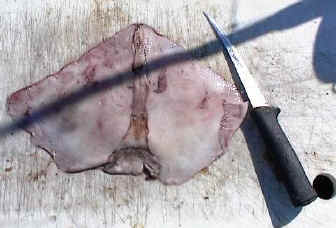 Now lets cut it into long strips. I like mine about an inch wide. 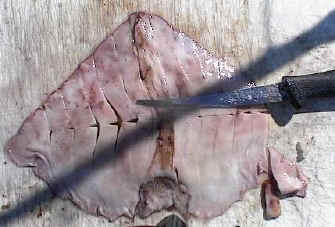 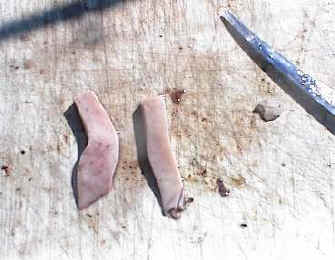 The day that I took this set of pics we were using fresh squid and cutting it up onboard. Another way is to buy and process it before you go. The wings that I buy come in 50 lb boxes. Cut up, it will be about 2, 5 gallon buckets full. At the beginning of the season, I take an entire box and have a bait cutting party. Cut the entire box as shown above. Now take a cardboard box, it needs to be a pretty big, cut it in half on and set it in the sun. Go to the store and buy several bags of sea salt. ( Sold usually for salting sidewalks during times of ice) Pour a bunch of salt on to one piece of cardboard box and toss in a hand full of squid. Make sure it is coated well with salt. Place it on the other piece of box and leave in the sun for several hours. Do the entire box at one time. Now take a 3 1/2 gallon pail ( they fit in freezers well) and move the salted squid to the pail. Seal it up and put it in your bait freezer. It will never completely freeze hard because of the salt. I have a friend that uses gallon sized ziplock bags instead of the 3 1/2 gallon pail. I like the buckets myself. Reach in and grab a bucket and take it to the boat. Use it for the day and whatever is left at the end of the day gets sealed up and back into the freezer for use the next time. No fuss, no muss. Squid that has been salted like this is tough as nails. You can fish with the same piece all day. It drives the grunts crazy. They chew on it to no avail. If I am going Grouper fishing I also like to take along a small box of fresh whole squid for making chicken legs....oh that's another discussion.

Now then, we have the bait cut. We need to put it on the hook. How you put the bait on the hook is about as important as fishing in the right spot and anchoring the boat in the right place. If baited incorrectly the baits are quickly stripped by the little bait stealing (*&^*&^%, ya them. 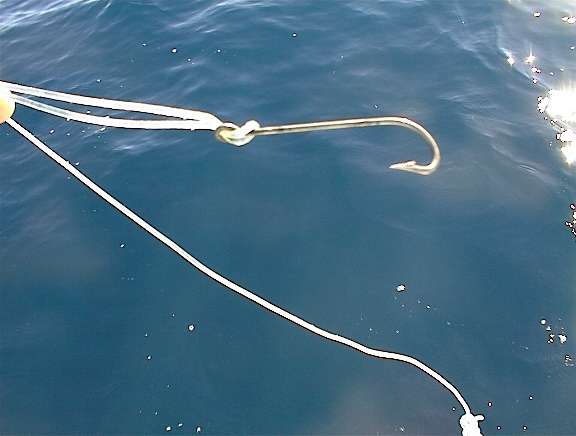 Hook the piece of squid at one end 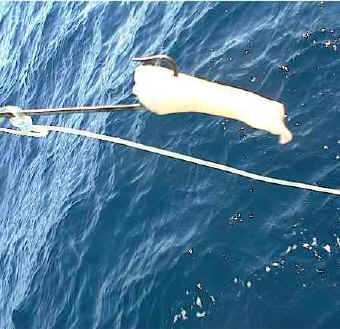 Now turn the bait and stick it again. Repeat as many times as you have hook and bait. The end result should look something like this. 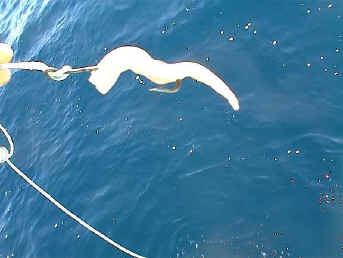 
Category: About The Bait:
Tags: None
Bookmark:

How To: Prepare Squid Wings - SaltwaterCentral.Com