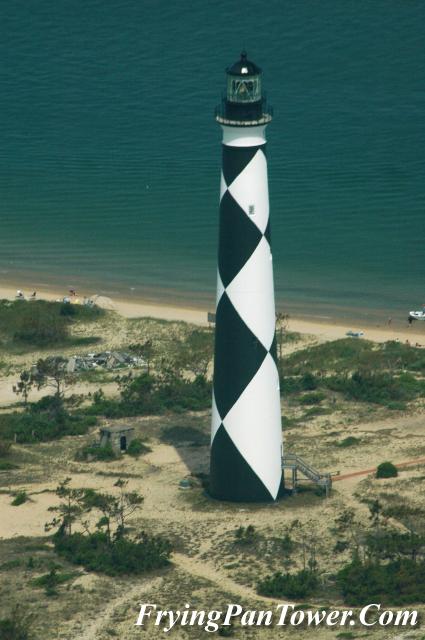 The station was described in 1850, when William Fulford was keeper, as having 13 lamps, new lighting apparatus having been installed in 1848. The keeper was obliged, in 1850, to keep wheeling away sand from the front side of the keeper''s dwelling to prevent the sand from covering it up. "The sand banks," the report reads, "are now higher than the tops of the windows; and only a few feet from them, at high water mark. On the sea side, it has washed away about 100 feet last year by abrasion and sea flows."

In 1851 Cape Lookout Lighthouse was reported as one of nine coast lights "which require to be improved.

The towers of each of them should have an elevation of 150 feet above the level of the sea and should be fitted up in the best manner with first-order lens apparatus, to insure a brilliancy and range adequate to the wants of commerce. These lights are not sufficiently well distinguished, but a general plan for all the seacoast lights will best accomplish this object."

On March 3, 1857, Congress appropriated $45,000 "for rebuilding and fitting out with first-order apparatus the lighthouse at Cape Lookout, North Carolina." The new lighthouse was completed and first lighted on November 1, 1859.

During the Civil War, in 1862, the tower was damaged and the lens, etc., removed, but by 1863 the lighthouse had been refitted and the light reexhibited. A third-order lens was placed in use temporarily until the first-order lens, "injured by the rebels" could be repaired and restored in 1867.

The lighthouse is now a black and white diagonally checkered tower, 169 feet above ground and 156 feet above feet water and shows a group flashing white electric light every 15 seconds of 80,000 candlepower, visible 19 miles, from a first-order lens. (1) (2)