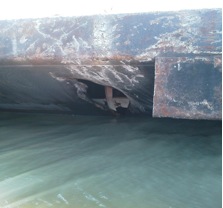 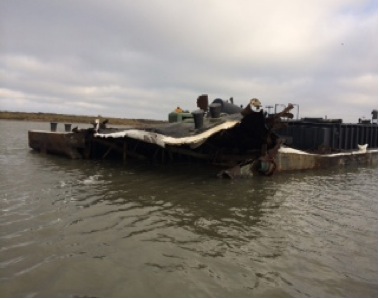 HOUSTON — The Coast Guard responded to a collision between two barges early Monday morning in the vicinity of Siever’s Cove on Bolivar Peninsula, in the Intracoastal Waterway.

At approximately 12:50 a.m., the captain of the tug pushing the TTI-150 contacted watchstanders at Coast Guard Marine Safety Unit Texas City to report the collision between the barge CBC 7026 and the barge TTI-150. A 25-foot Response Boat — Small from Station Galveston was sent with a team of incident responders, marine inspectors, and marine casualty investigators, to conduct a preliminary investigation and mitigate any possible further risk to the environment or the mariners aboard the vessels.

Both barges were damaged, but are currently secured and in a stable condition. No injuries or pollution have been reported or observed.

The cause of the incident is under investigation.