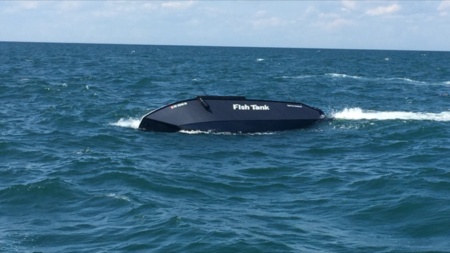 Watchstanders at the Sector North Carolina Command Center in Wilmington received a distress call from the 26-foot aluminum-hulled catamaran Fish Tank at about 1:18 p.m. taking on water approximately 26 miles southeast of Beaufort Inlet.

The crew arrived on scene at approximately 2:14 p.m. to find a Sea Tow crew attempting to dewater the catamaran. The Coast Guard worked with Sea Tow, but the crews were not able to stop the flooding. The Coast Guard took all four male passengers aboard the MLB and brought them to Station Fort Macon at about 4:20 p.m.

The Emerald Isle-homeported catamaran sank in about 50 feet of water.

“Though we were unable to save their vessel, it was fortunate we arrived in time to keep these men out of the water,” said Petty Officer 2nd Class Jonathan Torres, MLB operator for the case. “I’d rather have everyone safe than have someone get injured or worse trying to save a boat when capsizing is imminent."